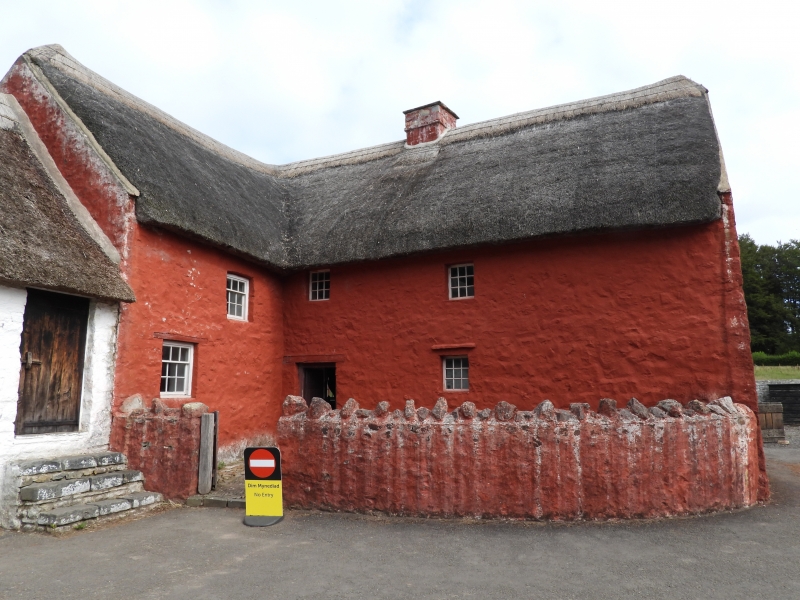 Red washed stone rubble walls with thatched roofs; renewal of some parts of fabric during reconstruction. L-shaped plan with cross-passage dividing the original house from the extensions. The main stack, which is in the original house, backs onto the passage. Two storeys with two storey rear wing at north-west end.
The elevation to the yard is the inside of the L. This has 3 over 6-pane sashes in the parlour wing to the left and 3 pane casements, two above and one below to the right.
The north-west elevation has a central door with, to the left, a 3 over 6-pane sash above a 6 over 6 pane one, then a 2-pane casement, and to the right a 6 over 6-pane sash with 3-pane casements above.
Sites of the outbuildings are marked in the yard outside.

The ground floor rooms have stopped and chamfered beams and mortar floors made from a formula in Iolo Morganwg's writing, recess in kitchen ceiling for hanging bacon. Under thatch of woven straw mats, scissors tie truss to southern bedroom and upper crucks. Many pieces of furniture from Glen George collection and principally from Glamorganshire and Carmarthenshire.