Parish Church of St Mary the Virgin and St Stephen the Martyr, including forecourt wall and railings 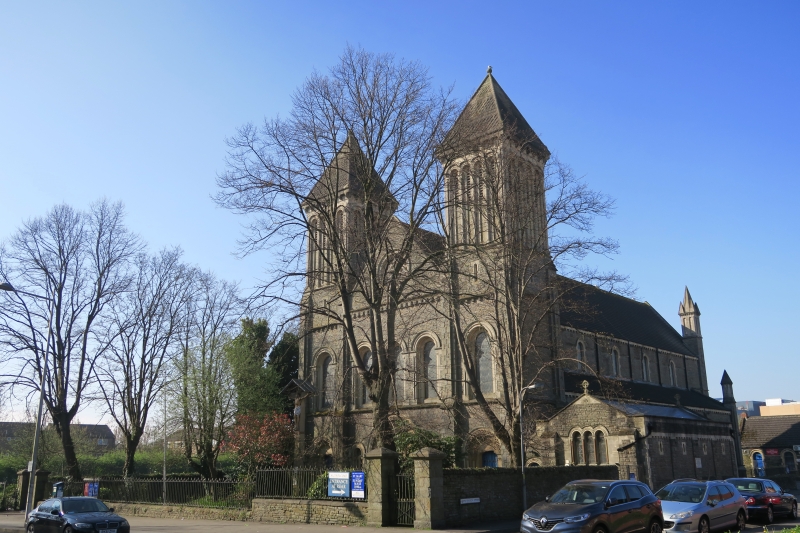 Entry Name: Parish Church of St Mary the Virgin and St Stephen the Martyr, including forecourt wall and railings

Location: Set back from the road behind small railed forecourt with crucifixion; stone gate piers to entrances at either end.

To preserve traditional liturgical orientation, the apparent main front of the church facing Bute Street is actually the rear of the church, with entrance front facing W.

Rubble with freestone dressings and belfries; asbestos tile roofs. Twin towered, 4-window front to Bute Street, disguising the fact that the main entrance is in fact at the W end beside the Vicarage. Pyramidal fishscale caps to tower roofs with grotesque carved corbel table and narrow louvered belfry openings; pilaster buttresses. Central rose window with broadly scalloped band below and lower bands to the towers. Diamond leaded glazing with colonettes and scalloped capitals. Broad central entrance with intersecting chevron and hatched ornament to arch mouldings; plain tympanum and trumeau; twin doorways. Narrow arched recesses to either side. Similar chevron ornament to shouldered outer doorways. Aisle set back to left hand side. 1907 snecked rubble vestry range to right, the gable end of which has crucifix finial and 3-light central window with granite columns and round headed lights. Parapet along right hand side with recessed panelling and small round arched lights. 5-bay side elevations with plain round arched fenestration and buttressing between bays. Lean-to aisles with similar detail. Continuous impost band. Westwerk-like elevation to W with square turrets and pinnacles; central rose window to gable with bracketed band to base. 2-tiers below of 3-round arched windows with sill bands and coloured glass. Octagonal stair turrets at ends of aisle. Tripartite entrance on 3 storeys composed of high central arch spanning twin main doorways and with lower flanking doorways; cushion capitals.

Listed as an interesting and well preserved example of this style, for its dominant location, andfor its historic interest.