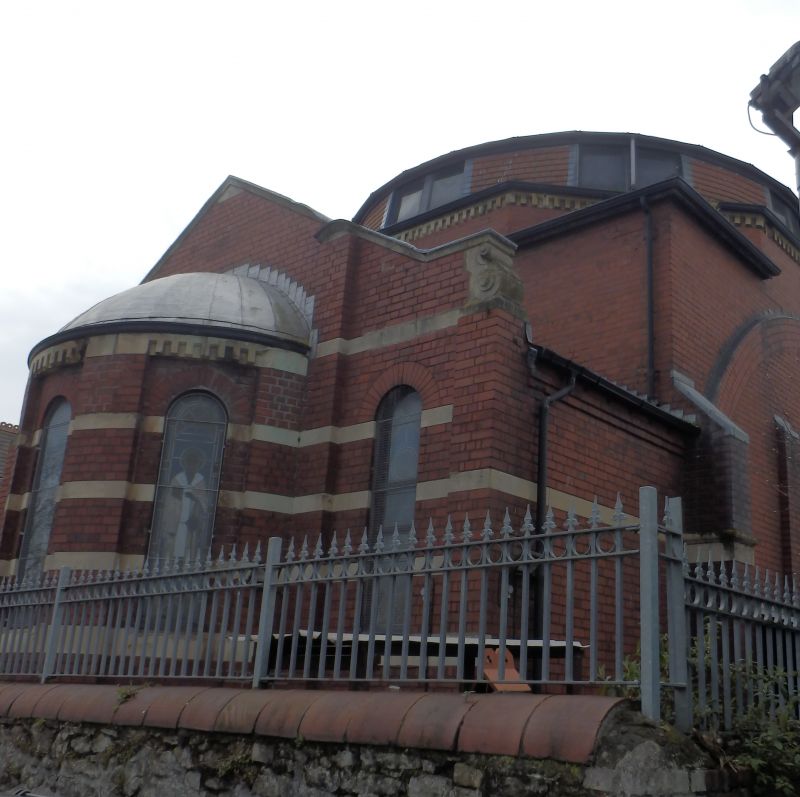 Location: On a small, square site, to N of St Mary's Church. Set back to W of Bute Street from which it is reached via North Church Street. Presbytery to the front.

Built in 1906 by James and Morgan, arhitects of Cardiff, on a site previously occupied by the Bute Dock Brewery. Cardiff has had a long history of trade with Greece and as a result quite a large Greek community had settled here by the end of C19; much of the money to build this church was raised by contributions from Greek sailors (see foundation stone). The church was consecrated in 1919; restoration, especially to the dome, carried out in 1985. New copper roofs, 1991.

Byzantine style, Greek Cross church with central lantern and saucer dome and apsidal E end; the plan includes an ambulatory and a narthex, lead roofs to the cupolas at the corners of the W front and modern felt roof to the rebuilt and tile hung dome; brick chimney stack. Mostly leaded small-pane glazing; modern 2-light dome windows. The central part of the gabled W front has segmental headed window with label and divided into 3-lights by giant order pilasters that flank the main entrance below; triangular headed tracery. 3 semicircular headed doorways each with fishscale type ornament to recessed stone tympani; panelled doors. At the gable apex is a timber bracketed bellcote - bell dated 1988 to right of entrance. Set back to either side are low, polygonal, corner 'towers' with cupolas, tall round headed windows and toothed cornices; that to right contains gallery staircase. The side elevations have simple buttresses and round headed windows; advanced voussoir arches beneath dome; blocked doorway to N side. Stepped 3-window apse with toothed cornice; priests doorway to S. Steps to cellar on S side.

The interior is in similar style and is entered through the narthex. The main body of the church below the dome is separated from the sanctuary by the tripartite iconostasis with gated segmental arch to centre; marble effect to the dividing piers. There was originally painted decoration to the dome depicting the Pantochrist to centre and the four evangelists to the corners which are not of pendative form. Gallery to W end (originally for the women) with grid pattern timber front. Pedimented altar against blocked doorway on N side; old seating along side walls retained; Bishop's throne dated 1929. The sanctuary has tunnel vaulted roof and the flanking areas of the apse have flat ceiling. Some coloured glass.

Listed for its special interest as a rare Welsh example of this style of architecture and for its historical importance to Cardiff.