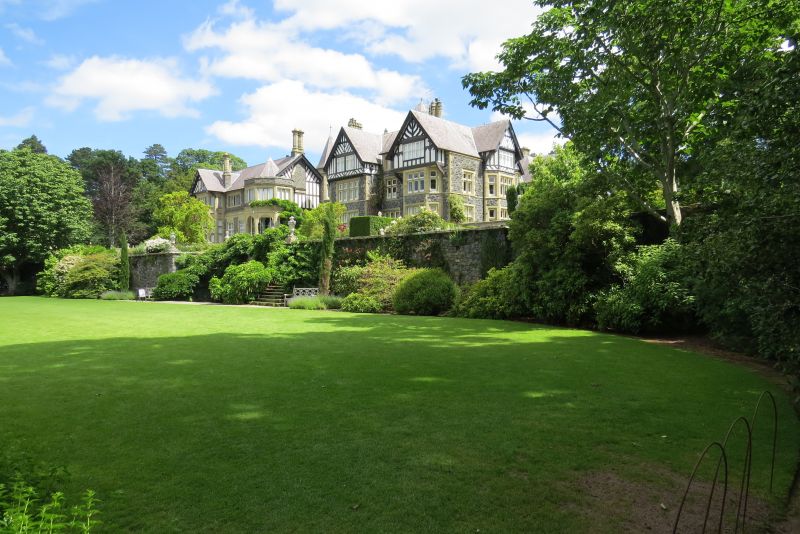 Location: Leading down from Bodnant house to the W and S.

The Bodnant estate was bought in 1874 by Henry Pochin, a wealthy industrial chemist, who refaced and altered the existing house of 1792. On his death in 1895 the estate passed to his daughter, Lady Aberconway who, together with her son, Henry Duncan McLaren, carried out a series of ambitious additions to a garden design initially laid out by Edward Milner c1875. The main focus of this phase was the creation of five terraces to the W of the house; conceived in 1903, they were constructed between 1905 and 1914 and incorporated the existing upper terrace (by Milner). Initially there were flights of steps leading from the upper terrace, via the Rose Terrace to the Croquet Terrace below. These however, were subsequently altered when McLaren obtained the Baroque Fountain, which he set in the centre of the retaining wall to the former terrace and created two new flights to sweep around either side of the fountain down to the Croquet Terrace; the top flights now lead only as far as the Rose Terrace.

The upper terrace walls are roughly 1.8m high and are of random rubble, slightly battered, with moulded sandstone copings. Flights of sandstone steps lead down to the Rose Terrace at the northern and southern ends of the W side, the former consisting of a single flight of 14 steps and the latter staged, with 7 and 8 steps; coped parapets, in two stages at the S end. Heraldic stone lions, sphinxes and flaming urns surmount the walls at intervals, chiefly the latter. At the N and S ends, the terrace walls return eastwards to follow the house. On the S side there is a further, centrally-placed 2-stage flight of steps, as before; the terrace continues for some 30m before returning to the S to frame the front lawns.

The Rose Terrace is paved with Yorkstone flags and has a central astrolabe on a baroque stone plinth. At the S end is a life-sized limestone statue of Priapus, which until 1938 was sited at the end of the Canal Terrace, where the Pin Mill is now. At the southern end elegant L-shaped flights of steps lead down to the Croquet Terrace and flank the Baroque Fountain in a half-well arrangement. The fountain is heavily-eroded and is set against the wall with a rectangular pool in front and flanking, rusticated pilasters. Flanking the steps and fountain, the retaining walls to the Rose Terrace run north- and southwards at a height of roughly 3.8m, where they terminate with further, plain pilasters; at this point the walls sweep around to the W in an arc, stepping down in four stages to an eventual height of 1.2m. The walls have stone coping carried on shaped corbels and have a shallow plinth.

Listed for the special interest of the contribution to these important gardens and for group value with other listed items at Bodnant.