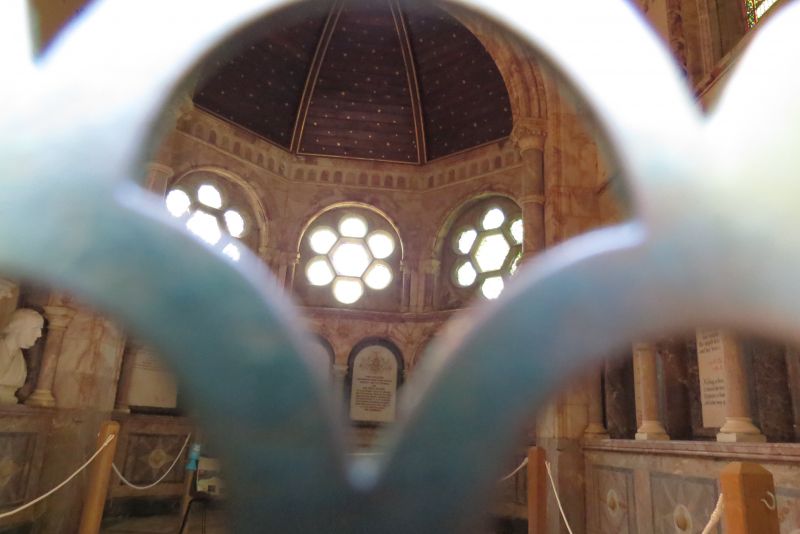 Location: Located at the end of the dell on a rock outcrop; overlooking the Afon Hiraethllyn some 300m S of Bodnant House.

Built 1882/3 as a mausoleum by Henry Davis Pochin (d.1895), industrial chemist and founder of the present gardens at Bodnant. The interior sculpted detail is by S Barfield, architectural sculptor of Leicester, who may also have been responsible for the overall design. The Poem replaces a former summerhouse.

Square storeyed tower in Neo-Norman style, with lower semi-octagonal apsidal projection to W; of rough-dressed, snecked local stone with sandstone dressings and slate roofs. The tower has a shallow pyramidal roof and an arcaded parapet with octagonal turrets at the corners; foliated bosses to lower parapet. Plain stringcourses to the upper section and a high moulded plinth to the lower, both returned around the sides; stepped angle buttresses. Central round-arched entrance, via 3 steps, with plain bosses to voussoirs and supported on engaged columns of red marble; sandstone shaft rings and stiff-leafed capitals. Above, a large round-arched plate tracery window with ringless columns, as before. Beneath this, a sandstone band with, in raised, decorative lettering:`The Poem.' Similar upper windows to N and S sides with a segmentally-arched basement entrance to the latter; wrought iron grille. Sandstone quoins to 3-stage apsidal projection, with plinth moulding as before and plain cill course to the upper section. Simple lancets with decorative iron grilles to basement level; three large oculi to upper stage.

Richly-appointed interior with arcaded niches above dado level, all composed of exotic marbles from various parts of the world;. the niches contain tablets and marble busts commemorating various members of the family. The marble cladding formerly extended above the arcading to the vaulted ceiling, though this has been removed in recent years; richly-coloured stained glass windows, were described in 1892. Inlaid marble floor and dado, the latter with brass vents for a heating system operated from a boiler room in the basement.

A late C19 mausoleum with unusually sumptuous interior.
Group value with other listed items at Bodnant.