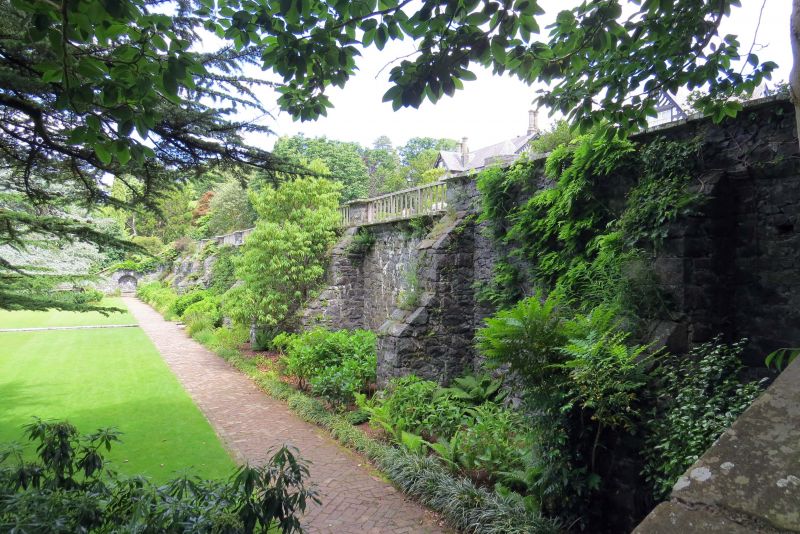 Location: Leading down from Bodnant house to the W.

The Bodnant estate was bought in 1874 by Henry Pochin, a wealthy industrial chemist, who refaced and altered the existing house of 1792. On his death in 1895 the estate passed to his daughter, Lady Aberconway who, together with her son, Henry Duncan McLaren, carried out a series of ambitious additions to a garden design initially laid out by Edward Milner c1875. The main focus of this phase was the creation of five terraces to the W of the house; conceived in 1903, they were constructed between 1905 and 1914.

Long terrace retaining wall of rubble, roughly 4.5m high, with central semi-octagonal fountain basin and stepped access at the N and S ends. The fountain has a segmentally-arched niche and a recessed plaque above inscribed: 'These terrace gardens were designed by Henry Duncan McLaren, 1905'. Flanking the fountain the terrace wall has 5 large, stepped buttresses to each side, effectively dividing the wall into a large central, and 5 flanking bays; the 2 outer bays have a low, coped wall head, whilst the remainder is surmounted by a plain wooden balustrade. The steps are arranged in an L-shape in three flights of 12, 12 and 5 steps respectively and have stone-coped parapets and single round-arched niches to their flanks. Stone coped, rubble walls continue westwards at a height of roughly 1.5m from the steps, to enclose the Lily Pond on the N and S sides; in the centres are round-headed arches with stepped, coped parapets rising to ball finials.

Listed for the special interest of the contribution to these important gardens and for group value with other listed items at Bodnant.