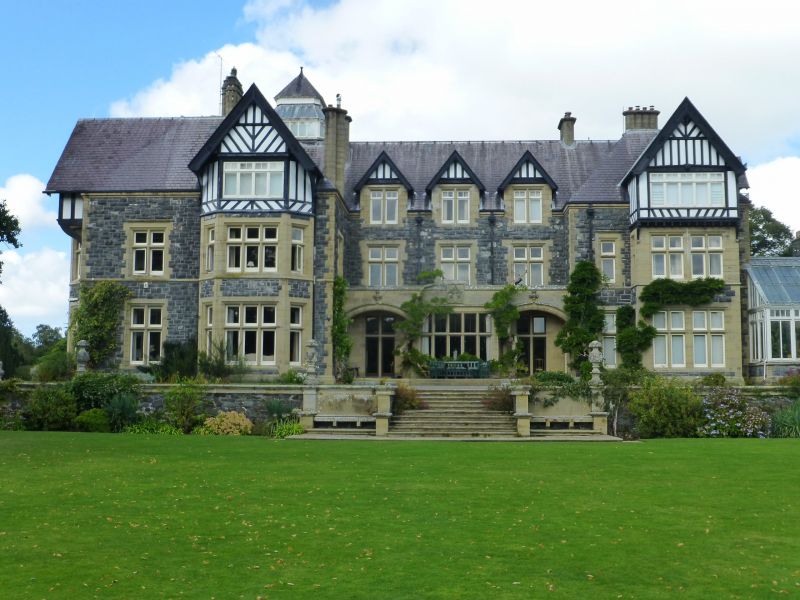 Location: Set in an outstanding garden (publicly accessible courtesy The National Trust) high above the east bank of the River Conwy and approx 3km S of Llansanffraid Glan Conwy.

The structure of Bodnant house was built by Colonel Forbes between 1770 and 1821 (Hubbard gives 1792 date) at a small distance from the original house called Old Bodnod. The late Georgian house, with 7-bay symmetrical S facade including outer wings, was bought in January 1875 by Henry Pochin, a wealthy industrial chemist and china clay magnate from Lancashire. The house was progressively rebuilt from 1875-6 in Old English style by W J Green of London who refaced the house with hard blue local stone, used Talacre sandstone for window dressings and quoins and replaced the sash windows with stone mullions and casements. An architectural drawing of 1880 by G Richards Julian (in estate office) shows the remodelled exterior before the Drawing-Room wing and conservatories were added.
The conservatory attached to the SE corner was built for Pochin by Messenger & Co in 1881-2 (contract dated Nov 1881) and the adjoining fernery was in place and planted by 1883. The conservatory originally had a gabled porch to the S side and there were double doors to the fernery.
Henry Pochin's daughter married the first Lord Aberconway and she and her son and grandson have further developed the house and hugely improved the gardens. The large Drawing-Room wing was added in 1898 to the NW tower of the house to designs by Ould of Grayson and Ould, architects of Chester. The Dining-Room was extended in 1911 including the bay towards the terraces, and the upper room over the porch (chimney-piece dated 1911) was added at that time. Other dates appear in the Drawing Room plasterwork - 1935 when the Shobdon panelling was inserted - and the Turret Room of 1936 which has panelling from Wheatley Hall, Doncaster.

Gothic N porch gives access to longitudinal hall with Serliana-style openings leading straight ahead to staircase hall. Left-hand wall has a window of 6 mullioned lights with heraldic glass to family members who have been MPs or held high government office. Hall runs to right with panelled walls incorporating a fine C18 lugged chimney-piece in dark marble with a pale marble head and draperies. The outer angle of the room is pierced by an archway leading through to the great Drawing Room, added in 1898.
This exceptionally fine room has re-used fittings from Shobdon Court (Herefordshire) which was demolished c1930 and a chimney piece from Arlington Street in London. Mid-Georgian panelling with fluted Ionic pilasters, columns to entrance and window bays, pulvinated bay-leaf entablature over dentil cornice, Rococo-style plasterwork with foliage and baskets to ceiling borders. The W window bay plasterwork is dated 1934 marking a further change in the design. A pair of C18 doorcases under segmental pediments flank the marble chimney-piece to inner wall with canted window bay opposite. Triangular pediment to main entrance within fluted columned screen, round-headed niche in wall to right containing Antique vase.
The staircase hall has doorway stright ahead into the Dining Room remodelled in 1911 with its extended window bay, panelled walls with full-height chimney-piece incorporating a portrait of Henry Pochin at far end. To right side of staircase hall are paired archways on reeded piers, one leading up and the left arch leading through to Garden Room with strapwork ceiling of 1911 and canted timber chimney-piece within lugged Georgian surround. Beyond are the small Drawing-room and Library overlooking the terraced gardens. The interior of the conservatory retains its cross-plan though the pool has been changed, and the walls have patterned, coloured glazing; the roof is supported by scolled brackets and tie-rods with original threaded rods for vent operations.
Top-lit inner stair-hall with open handrails and turned balusters to stairs and galleries, panelled dados to cantilevered flights with closed strings and Jacobethan newel posts at first-floor supporting upper bedroom gallery. Octagonal glazed lantern with squinches over rectangular lightwell flanked by panelled waggon ceilings to outer bays. The main architectural features on first-floor include the Turret Room with full-height C18 panelling and foliage drops to pilasters flanking Georgian marble chimney-piece, and the Billiard Room. This is sited over the great Drawing Room and has Gothic pierced braces to top lighting and a carved stone inglenook chimney-piece with Arabic tilework.

Listed as a significant country house in the 'Old English' style, characterised by varied and dynamic massing, vernacular revival and 'Jacobean' detail. The architectural character of the house works with its highly picturesque setting in the Conwy valley, and as the centre-piece of the important gardens of Bodnant.