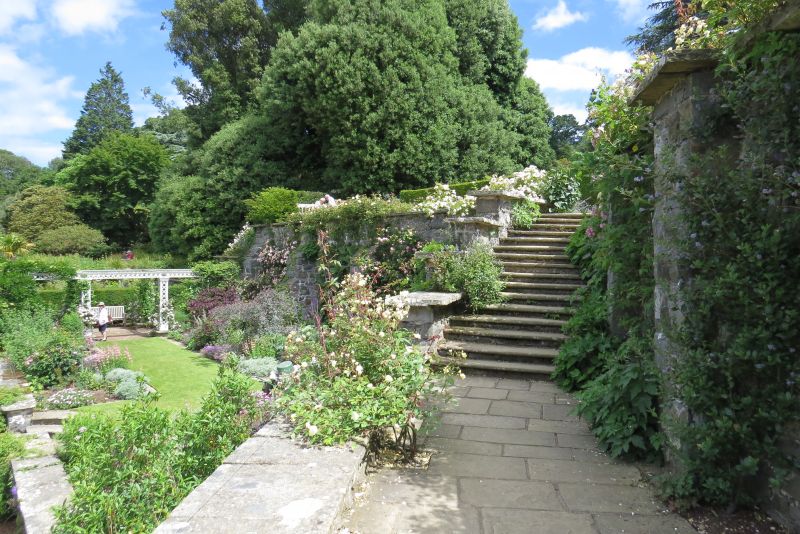 Location: Leading down from Bodnant house to the W, below the Lily Terrace.

The Bodnant estate was bought in 1874 by Henry Davis Pochin, a wealthy industrial chemist, who refaced and altered the existing house of 1792. On his death in 1895 the estate passed to his daughter, Lady Aberconway who, together with her son, Henry Duncan McLaren, carried out a series of ambitious additions to a garden design initially laid out by Edward Milner c1875. The main focus of this phase was the creation of five terraces to the W of the house; conceived in 1903, they were constructed between 1905 and 1914. The lowest of these, the Canal Terrace, is accessed via curved flights of steps from the Lily Terrace above.

Curved rubble retaining walls in two tiers, with sandstone steps arranged in two flights of 16 steps each. The steps have coped parapets and the walls have a series of plain flat buttresses; there is a central bench recess to the lower tier. The upper contains a bowed pergola walk or viewing terrace, with recessed seats at either end, contained within slate-roofed niches. The retaining wall continues for two straight bays to N and S, each with two large stepped buttresses. At the bottom in the centre is an advanced flight of 8 steps leading to the level of the Canal Terrace. This has low, curved flanking walls which sweep forwards to create a concave space to contrast with the main, convex walls; 2 stone sphinx figures surmount plain plinth-piers flanking the steps. To the N and S, the concave flanking walls return in a straight line parallel with the Canal Terrace; these are retaining walls, roughly 1.5m high and with plain regularly-spaced flat buttresses.

Listed for the special interest of its contribution to these important gardens and for group value with other listed items at Bodnant.