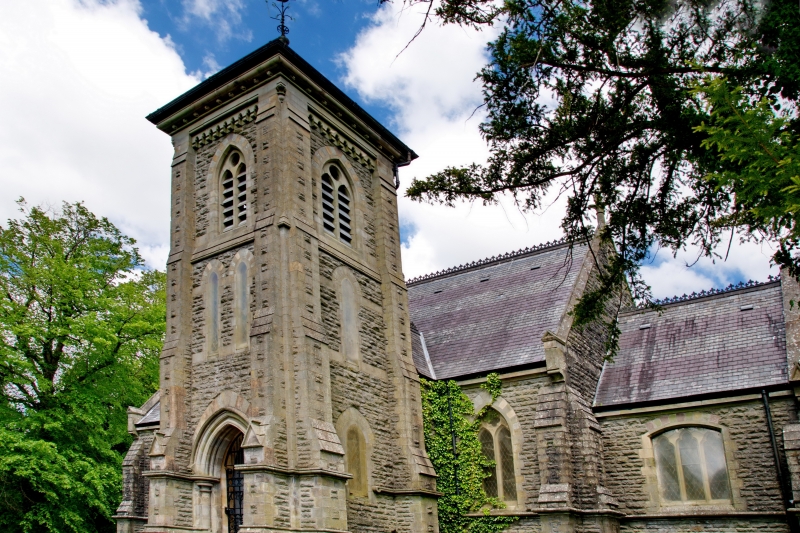 Location: The cemetery is on the main Valley thoroughfare at the very eastern edge of the community and on the boundary with Porth; the chapel is near the main central entrance with the extensive cemetery stret

Cemetery created 1882 on land of Llethrddu Farm, some 10 years after the establishment of the first Rhondda cemetery in Treorchy, to serve the communities of the mid Rhondda, especially Porth and surrounding district; originally known as The Rhondda Joint Cemetery, inscribed thus on entrance piers, and also as Llethrddu Cemetery. Architect believed to be H Jenkins, described as 'Surveyor and Architect of the Joint Burial Board' and contractor Hopkin Knill. The Joint Burial Board Minute Book held in the lodge has monthly reports on the progress of the construction through 1882 . Undated later drawing shows a spire in place of present pyramidal roof, which is referred to in the minutes as being shingled.

S tower which also serves as an entrance porch is of 3 storeys with pyramidal roof with swept eaves, replacing a former spire, and is surmounted by a decorative weather vane. Eaves cornice has ballflower moulding and lombard frieze below; full height angle buttresses with offsets are mainly of ashlar, and ashlar bands in different forms divide the storeys; belfry has double louvred lancets with plate tracery, narrow lancets below, and lancets to ground floor. Five stone steps lead to S heavily moulded pointed arched main entrance doorway which has very decorative wrought iron gate (described as a grille in the minutes); porch has rendered walls, flag floor, a pointed arch in front of the internal doorway which has a planked door with decorative hinges.

5 bay roof is boarded. Walls are rendered with exposed quoins. Floor is quarry tiled. An unusual feature is the boxed family pews aligned N/S facing each other on either side of central aisle in E bay of nave. Pointed chancel arch with foliage capitals; the main furnishing is a reading desk central under the chancel arch.

Listed as the only surviving original Rhondda cemetery chapel, for its interesting design and detailing, for its dominating position within the cemetery, and for group value with monuments to David Evans, William Evans and Daniel Thomas.