Aqueduct over the Afon Lwyd, Monmouthshire and Brecon Canal, including weir to south 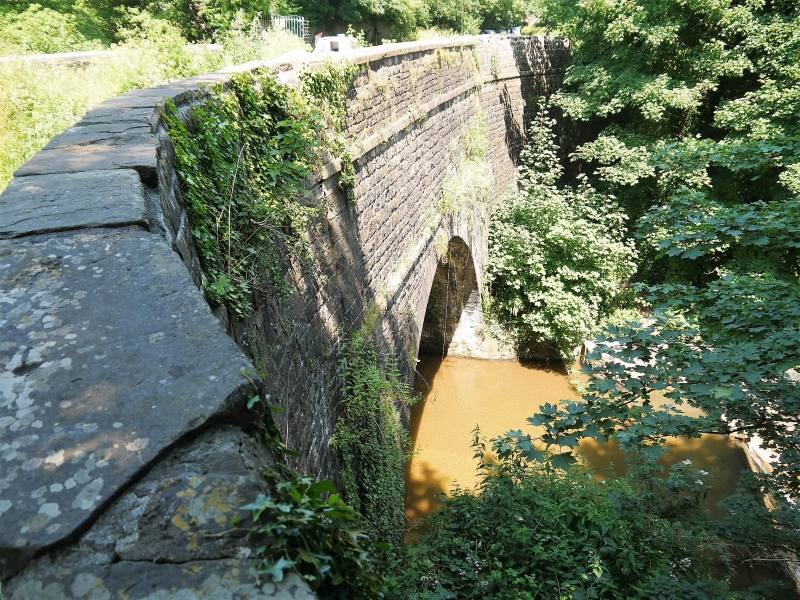 Entry Name: Aqueduct over the Afon Lwyd, Monmouthshire and Brecon Canal, including weir to south

Location: It is about 450m south-east of Pontymoile roundabout approached by the canal towpath from Pontymoile basin.

The Brecknock and Abergavenny Canal was promoted in 1792 to connect the upper Usk valley to the Monmouthshire Canal at Pontymoile and from there to the sea at Newport. Construction began in 1797, with Thomas Dadford Jnr. as engineer, and the first section, from Gilwern to Llangynidr was completed in that year with the stretch as far as Brecon following in 1800. Work then stopped for a time with the result that the section to the Blaenavon Road east of Govilon was not completed until 1805, now with Thomas Cartwright as engineer. Further funds had to be raised and the last section from west of Llanfoist to Pontymoile was completed betwen 1809 and 1812, with William Crosley as engineer. Linked to the tramroads the canal was an important artery for trade in iron, lime and coal. In 1865 the Monmouthshire and the Brecknock and Abergavenny Canal Companies merged becoming the Monmouthshire and Brecon Canal Company. Later still in 1880 the canal was bought out by the Great Western Railway and gradually the canal was run down until it was abandoned finally in 1962. Restoration work was begun in 1964, and the canal is once again open between Pontymoile and Brecon with the title Monmouthshire and Brecon Canal.

Built of squared coursed stone with dressed voussoirs and pilaster bands. A tall single arch aqueduct of very solid appearance with a semi-circular arch framed by narrow pilaster strips and a band across at the crown. Deep curved wing walls, and a parapet rests on another band. This is a handsome structure with the same treatment on either face, but the downstream side has the additional interest of the masonry weir below. This aqueduct crosses the boundary into New Inn Community Area.

This is a very handsome and well built canal aqueduct, and a major structure surviving in use for this important canal.