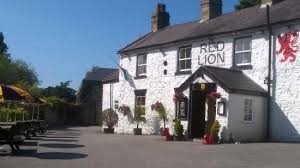 Location: Prominently sited in the centre of the village, W of the church and the main road junction in the village.

The present building was built in the third quarter of the C19 and is first shown as a public house on the 1871 Ordnance Survey, but it was adapted from a house shown on the 1839 Tithe map.

A 2-storey 4-window public house of whitened rubble-stone walls, and a roof of graded local slate behind coped gables on moulded kneelers, and with 4 coursed-stone stacks. Windows have wedge lintels, stone sills and 4-pane sashes inserted in the late C19. The doorway is R of centre in an added gabled porch with double doors. The R gable end has a single-storey former bakehouse of whitened rubble stone, slate roof and stack cut down on the R side. Its front wall projects in front of the main range and has a small-pane hornless sash window. A lean-to is set back against the gable end. Against the L gable of the main range is a lower wing of rubble stone and concrete tile roof. A rear wing has an added projection on the W side.

Internal partitions mainly been removed. The room to the R retains a fireplace with timber lintel, probably belonging to the earlier house, while the room on the L side has a stone lintelled fireplace. The bakehouse has a brick fireplace.

Listed for its retention of traditional C19 character to the front, and for its contribution to the historic character of Llanasa.