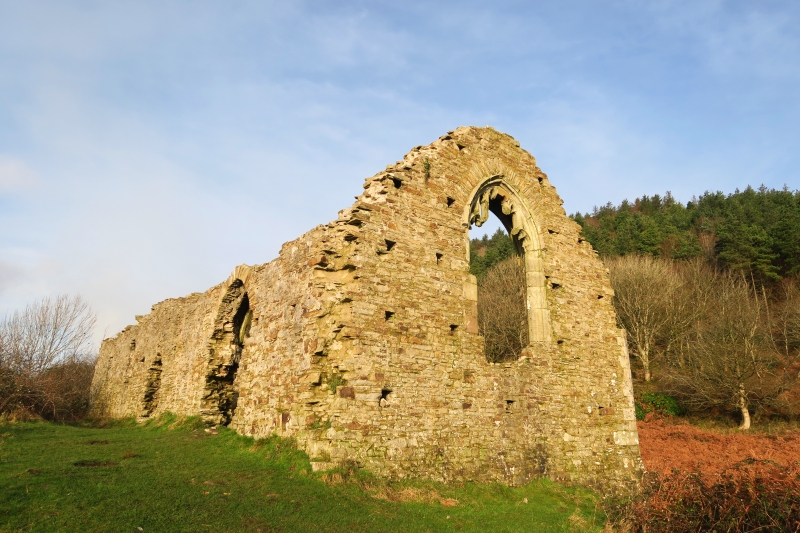 Location: Located on the hillside, Graig Fawr, north of Margam Park. Accessed by a footpath which leads SW off the road along Cwm Bach. In a prominent and spectacular position.

C14-15 church built for the local population of Margam who were not able to worship in the abbey church. In ruins, with fragments of Decorated and Perpendicular tracery. The E window (and possibly the adjacent S window) are Perpendicular and date to c1470. The W doorway does not sit well with the Decorated window above, but the dressing of the door is missing so it cannot be dated. It is possible that the church dates to 1470 and that the Decorated tracery was brought from the abbey. Also known as Capel Mair and Cryke Chapel.

Roofless chapel of Sutton stone with battered plinth and quoins. The E and W ends and S side stand full height, whilst the N side survives up to 1.5m high. Single range with nave and chancel in one. Entrance at W end under segmental arched head (the exterior dressings are missing). Above and offset slightly to the L is a large window opening with shallow pointed head. Some upper level tracery survives, including part of a quatrefoil in the apex and cusps below, suggesting that the window had 2 lights with trefoiled heads.

On the S side is a 2nd doorway R of centre with a shallow pointed-arched head. A large window with similar head is to the R, with 2 lancets to the L. That nearest the W end retains its trefoiled head, carved from a single piece of stone. The E window also has a shallow pointed head, but the surviving upper level tracery is Perpendicular and there were 4 cinquefoil-headed lights. The profile of the top of the N wall suggests that there may have been 2 windows.

The interior jambs to the openings partially survive, whilst most of the openings have segmental arches of voussoirs. The exceptions are the E window and the adjacent S window which have dressed stone arches to the interior sides. The latter retains some plastering. Piscina to SE with ogee head. Splayed reveals to S lancets. Small recesses in W gable end.

Listed grade II* for its medieval fabric and tracery detail. A very prominent structure in the landscape at Margam.