A Grade I Listed Building in Flint, Flintshire 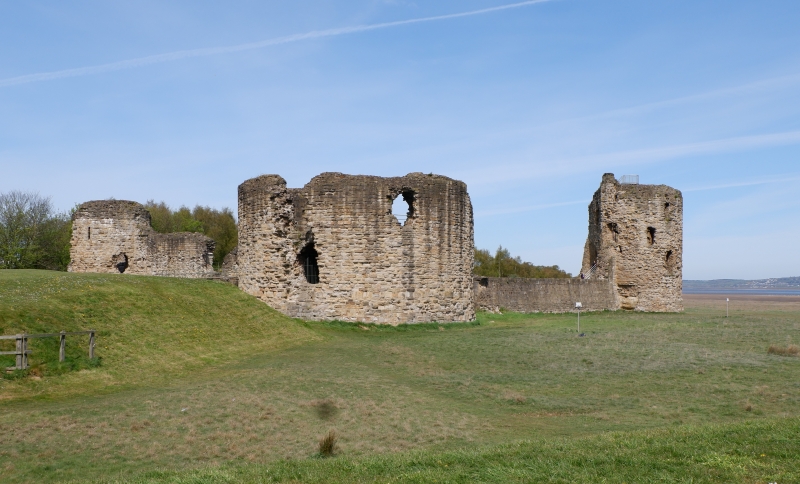 First of castles built by Edward I during his conquest of North Wales; the town of Flint was founded at the same time, as a fortified market town. Unique great tower of the castle was based on the Tour de Constance at Aigues Mortes. Construction known to have begun 1277, but following Edward's treaty with Llewelyn ap Gruffudd, building slowed and not complete by 1282 when the town was burnt, and the castle besieged by Welsh forces. In 1399, Richard II surrendered to Henry IV at the castle. Following sieges in Civil War, castle dismantled on orders of Parliament, and by 1652 was almost buried in its own ruins.

Description: Ruinous. Brown, yellow, and red stone, quarried from site, and across Dee on Wirral. Inner bailey consists of almost square enclosure with sides of approximately 50m (E-W) by 40m (N-S), and corner towers. Medieval curtain wall survives to S, and at NW corner (most of other curtain walling is modern on line of medieval walls). South curtain wall has arched openings to N, with arrow slits and remains of gatehouse (E); 2 similar openings in NW wall, and traces of others. Round towers (approx 11m in diameter) at SW, NW, NE corners quarter-engaged in curtain wall; towers have remains of stairs and arrow slits. Bailey has foundations of buildings, and well. At SE corner is unique great tower, or donjon (approx 20m in diameter). Basement and part of one upper floor survive (but evidence that tower rose higher). Stone vaulted passage has steps down to central chamber of tower; arrow slits, latrine shutes, well to S. One of the 5 radial first floor rooms was chapel, facing E; stoup and springing for barrel vault. To SW of castle is section of revetment wall of ditch (tidal moat) to former outer bailey of Castle. Opposite Castle Street are modern steps on site of gateway (higher masonry to R). Wall parallel to Castle Ditch Street for approx 120 metres (broken towards N), then turns at right angles at SE end for 30 metres.