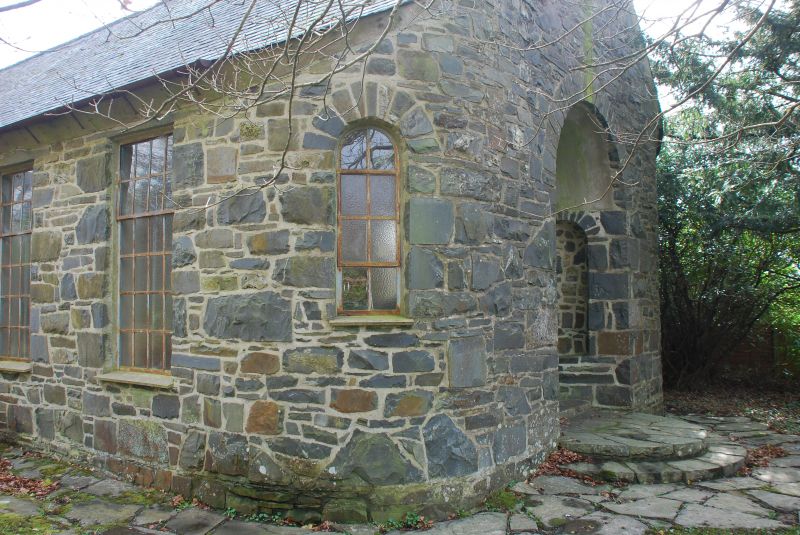 Location: The building stands back from the Tremadoc to Criccieth road and is reached by a short path leading to high ground N of the village.

Built c1935 by Clough Williams-Ellis, architect, initially as a church for the village, a substitute for St Cynhaearn which was considered to be too remote for regular use. It has since been used as a church and church hall.

Built of selected hard roughly-squared rubble stone, with a slate roof. Single cell structure with rounded corners, subdivided internally, with a lean-to vestry on the N side. The building is entered from the W end by a recessed door, set within a tall round arch, and the sides splayed back to a pair of panelled doors with a fanlight over, round-headed niches central to both tapering sides, and in front, two semi-circular steps. In the gable above the arch, a circular oculus containing the bell. Round-headed windows on the W rounded corners. Main windows are multi-paned with flat iron glazing bars, 5 on the S and 4 on the N, all with slate sills and lintels directly below the angled boxed eaves. The walls are also rounded at the E end with an E window at high level. The roof continues down over the vestry, which also has rounded N corners and angled boxed eaves. Over the W end, a small tower with timber sides in the form of a cross, partially louvred, and having a slated skirt and 2-stage swept roof.

Nave has 5 roof bays, ceiled at collar level, with angled rod ties from the centre of the tie beams. Wood block floor and plastered walls. The raised chancel area, divided off by a chancel arch, is floored with slate. At the W end, on either side of the re-entrant door, is a baptistry on the S, and the organ on the N. An inscription on the S wall of the chancel records the building of the church for Revd Francis Williams, d.1981.

Included as a well designed and thoughtfully detailed church and hall by a well-known Welsh architect.