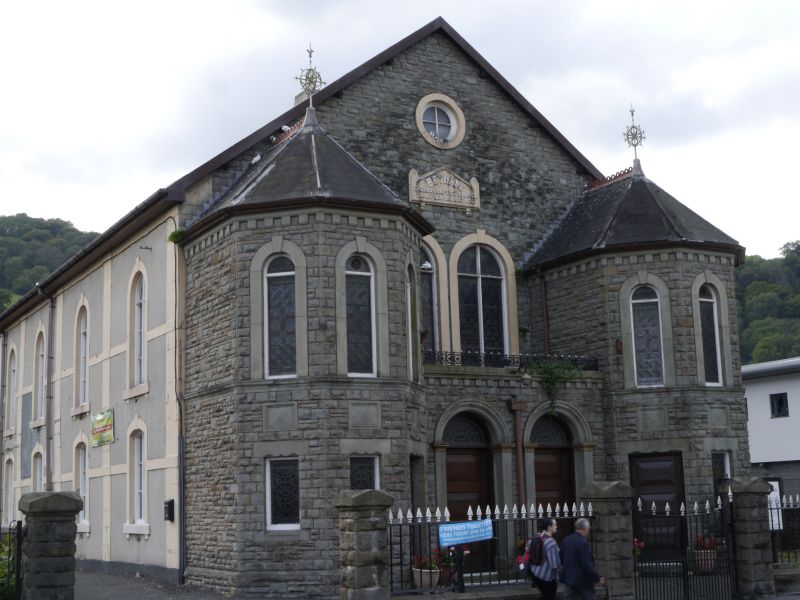 Location: In the town centre, on the W side of the main thoroughfare, S of Tredegar Grounds, with small walled and railed courtyard in front and passages to side.

Built 1858, extended 1867, further enlarged 1875 and 1893. Lower Risca development from 1835 is associated with the Pontymister Ironworks. Hannah Ward and daughter Margaret - who became Margaret David - were the founders in 1855, concerned to establish an English-speaking Baptist Cause. First pastor Revd T Reeves 1858-1873. Famous Baptist preacher Charles Haddon Spurgeon visited 1860. In 1867 choir gallery over chapel entrance and new staircase were erected. Further enlargement including addition of vestry to rear in 1875, by 'Mr Burgoyne of Blaenavaon'. Second minister Revd Thomas Thomas 1874-1922. In 1880 the closure of the tinworks and explosion at Risca Colliery brought difficulties to the community. In 1893 the chapel was enlarged to rear which involved building over the former graveyard, the displaced monuments now set against the N boundary wall. Choir gallery was built over old vestry and new Sunday School added. No architect was employed; the work was done by local builders, Joseph Watkins responsible for the masonry and John Pritchard the carpentry; new organ installed, schoolroom opened 1894; total cost c £3000. Daughter church established at Hope Crosskeys and grandaughter church Zion Cwmcarn. Strong tradition of choral singing, the choir in its heyday under direction of Joseph Watkins.

Deep gable-fronted chapel. Of snecked rubble, with snecked rockfaced stone to the staircase bays, part-tooled ashlar dressings; rendered to side; Welsh slate roof with ridge ventilators. Gable end frontage has paired round headed gallery windows with keystone; a roundel in apex above the datestone. Stepped forward below is the porch bay with paired round-headed doorways with horizontally panelled doors and wrought iron guard to the parapet above. Projecting on each side are the 5-sided staircase bays with half conical roofs surmounted by metal finials, billet-moulded eaves band, rounded-headed windows with keystones to the 3 front faces at first floor level, square headed below; moulded plaques between. Coloured glass in decorative leading to the windows which have moulded lintels. 6-bay side chapel elevation has round-arched gallery windows, cambered-arched to ground floor, each bay separated by a painted rendered pilaster intersecting at right angles with a continuous hoodmould over the ground floor windows; all windows with moulded keystones and shallow sills. Attached to rear is the Sunday School wing mostly of red and yellow brick with horned sashes to 7 ground floor bays and clerestory lights above.

Interior is long, with 4-sided raked gallery with painted panelled front and bracketed soffit supported by 6 columns on each side.The choir gallery has a painted balustraded front stepped down in front of the pipe organ; behind are the quarried lights to the Sunday School. Below is a fine wide polished wood pulpit enriched with round-arch mouldings to top tier, panelled below, a copy of that in Spurgeon Tabernacle London; platform has polished wood rail and decorative wrought iron balusters. Bapatistry underneath platform; no set fawr; to either side part-glazed swing doors to the Sunday School. On walls to sides are plaques to the ministers of the church, including founder Margaret David. Scribed render, boarded dado and angled pews. Ceiling has coving and 18 decorative wooden panels within a frame incorporating a central rosette with ventilator. Fine vestible with decorative plasterwork, staircases in the two turrets with turned balusters and decorative newel posts; decorative glazing to the interior doors. Side windows are 6-pane with one pull-down casement; some coloured glass.

Schoolroom hall to rear is 2 storeys high, on one side the rear choir and organ gallery supported on tall cast iron columns and the other a balustraded gallery with the boarded partitions for the schoolrooms, the walls with painted text. Similarly the ground floor has half-glazed wooden partitions each with a central door and windows either side which can be raised to enlarge the hall area. Woodblock floor.

Listed for its special interest as a later C19 Valleys' chapel with well documented history reflecting the social and religious developments of its time and illustrating these in its architecture. Group value with Moriah Baptist Church and also the Entrance to and Jubilee Statue in Tredegar Grounds.