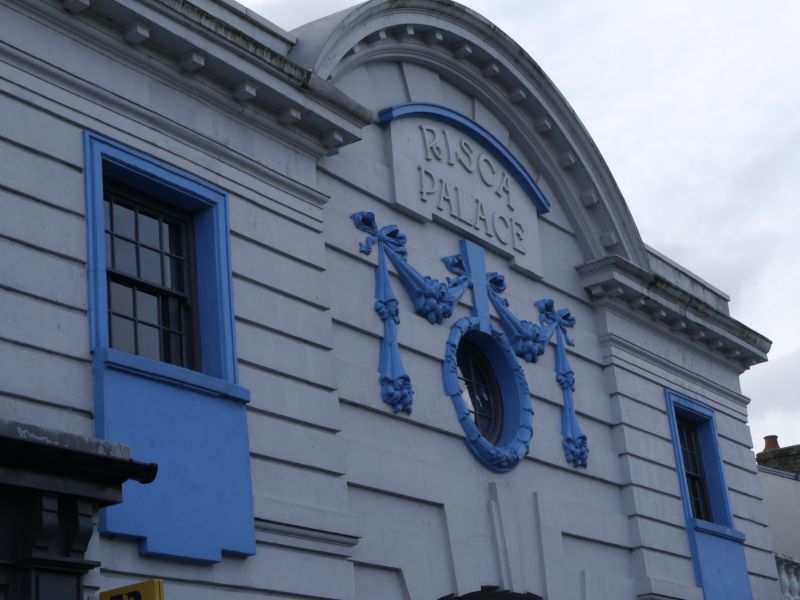 Location: In the centre of the town opposite Tredegar Grounds.

Not shown on second edition OS map of 1902, but is on edition of 1917. Thus it was probably erected as a purpose-built cinema just before the First World War and as part of the provision of entertainment and facilities for the local industrial workforce; nearby Workmen's Institute was erected 1916 and Tredegar Grounds opposite had been opened as a recreation area in 1897. Later used as a bingo hall and in 1999 disused and boarded up.

Cinema comprising rectangular entrance block fronting the pitched-roof auditorium. The frontage is rendered, rusticated and painted in contrasting shades. 2 storeys, 3 bays, the centre slightly recessed with wide elliptical arched entrance with prominent voussoirs; this arch is echoed in the segmental arched central bay of the modillion cornice; below is RISCA PALACE in relief overhung by a later sign and underneath is an oculus with deep keystone and swags. On either side are first floor windows now blocked with moulded surrounds and deep aprons and on ground floor paired cambered-arched openings with keyblocks and sills. rustication extends round side elevations and to right a balustrade with end pier extends at first floor level above a former shopfront.

Used as a bingo-hall and subsequently disused; seating reported as removed.

Included for its interest as one of the earliest purpose-built cinemas in Wales and for group value with the Entrance to Tredegar Grounds, the Jubilee Statue and the two Baptist churches on either side.