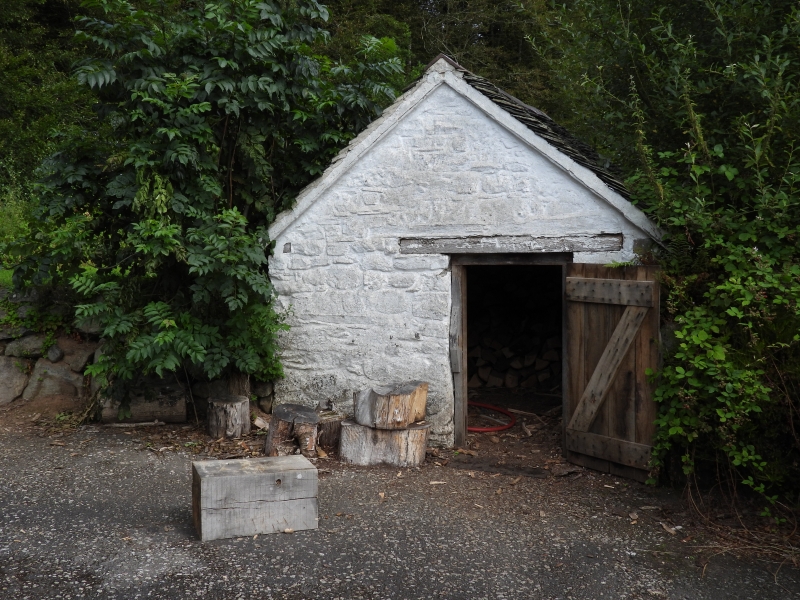 Long-house brought from Duffryn Claerwen, Radnorshire, a place now beneath the Claerwen reservoir and re-erected in the Museum in 1959. Probable late C15 origin, the crucks have been dendro-dated to c1470 but largely rebuilt in the early/mid C18, probably 1734 (date carved on frame of main doorway), with only the two cruck trusses in the cowhouse remaining from the earlier period. There is an indenture of 1579 concerning Cilewent which is in the Museum's possession.

The building has stone rubble walls, the front wall being whitewashed; stone tile gabled roofs, with stone stack on northern gable end of main wing and on western gable end of rear wing. Traditional Welsh longhouse type with cow-house, stable and front wing of house with common roofline; lower rear wing to house.
From north to south, eastern elevation has firstly, unglazed mullioned opening to ground floor opening of house and gabled loft window above it, secondly, the main square-headed entrance for both house and cow-house with date '1734' on the head; thirdly, small window opening to cow-house and, fourthly, square-headed entry to stables; loft door in south gable end; there are two different types of stonework evident in this gable.
Rear elevation only with small window and another similar in north gable. Dairy with window only on north side. Large stack.
Outside in the yard there is a single storey peat house with stone tile gabled roof, also sheep pens, as being appropriate adjuncts to this farmhouse.

Inside the cow-house and stable are two cruck trusses, see History. The floor is partly of earth and partly pitched with pebbles; opening in west wall for exit of manure, feeding passage and house with stone pitched floor. Timber-framed partitions in house; front and rear ground floor rooms with stopped and chamfered ceiling beams and fireplace bressumer; staircase with small window on north-sest side of the fireplace in the front wing.